The Seiling FFA Spotlight is focused on Ellen Schneider, a sophomore softball player for the Wildcats. Schneider starts at first base for Seiling and has been using the extra time at home lately to get ready for her junior season.

“I’ve been working with a batting tee while school has been out,” said Schneider, “just trying to get myself ready for my junior season.”

Schneider’s involvement with the FFA focuses on showing and raising pigs with her family. She even won the Grand Champion Market Barrow at the Dewey County Stock Show during the show season.

“It was pretty cool to win, because our county stock show is super hard to do good at, so being able to win that during the show season was really cool,” said Schneider.

Ellen also credits her family, mainly her big sister, for getting her involved with FFA.

“Mainly my family got me involved,” said Schneider, “but my older sister was really involved too, and she’s kind of my role model for FFA and she’s always excited and gets pumped up so she pushed me to do it and I realized I loved it.”

Besides showing pigs Schneider recently got involved with Farm Business Management and is off to a great start.

Ellen is also a standout in the classroom, maintaining a 4.0 GPA. She is a member of the Beta Club and the National Honor Society.

GIRLS Coach: Garrett Spears 2019-20 Record: 19-10 An up-tempo style of basketball is what you can expect from Kingfisher girls this...

VOTE NOW! Which NWOK Golf/Tennis Male Athlete Should We Feature Next? -...

There are many good high school golfers and tennis players in the area, but which one should we feature in our next issue? YOU let us know... 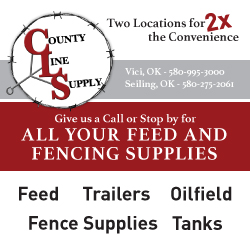